IN 2020 THE CAMPING WAS CONVERTED IN "HOLIDAY VILLAGE"

SO THEN, NO TENDS, CAMPERS OR ROULOTTES WILL BE ACCEPTED, BUT ONLY BUNGALOWS RESERVATIONS ARE ALLOWED

The restaurant-pizzeria in the complex is an indipendent structure respect to the village, so it can observe a different seasonal opening

Although it is a little island and, apparently not so welcoming, Capraia was colonised since the early history. The most important colonisation was the Roman one, which left many archaeological findings, such as the ruins of a villa near the port.

The Romans conquered the island after the first Punic War (264 B.C.): Capraia was strategic land for the following conquests of Sardinia and Corsica. When the Roman Empire fell down, many Christian hermits reached the island and gave birth to little monastic communities based on work, prayer and contemplation (IV-V century).

IX century: the Saracen army began to attack the coasts of Capraia: the monks were forced to abandon the island. Only in the XI century, when the Mariner Republic of Pisa flourished, Capraia lived a fairly peaceful period. XVI century: many Moorish incursions acted cruelly against the unarmed population. The attack of Dragut, who captured hundreds of inhabitants, was particularly ravaging.

1661: the Grey Friars built the convent and church of Sant'Antonio. 1767: the inhabitants of Capraia tried to become independent, but after a period of battles, the island was occupied by the French army. The French occupation went on during the period of Napoleon. 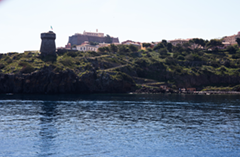 1815: after Napoleon fell down the island became part of the Reign of Sardinia. 1837: Carlo Alberto came to Capraia and struck by the misery of the island, declared the construction of a factory of cigars (known as Palazzone), which gave job to hundreds of women. 1861: Capraia was annexed to the Reign of Italy. 1873: Capraia became a penal cell, where 400 brigands of Calabria were sent. The jail remained open until 1986. Nowadays Capraia is part of the Park of Tuscan Isles.